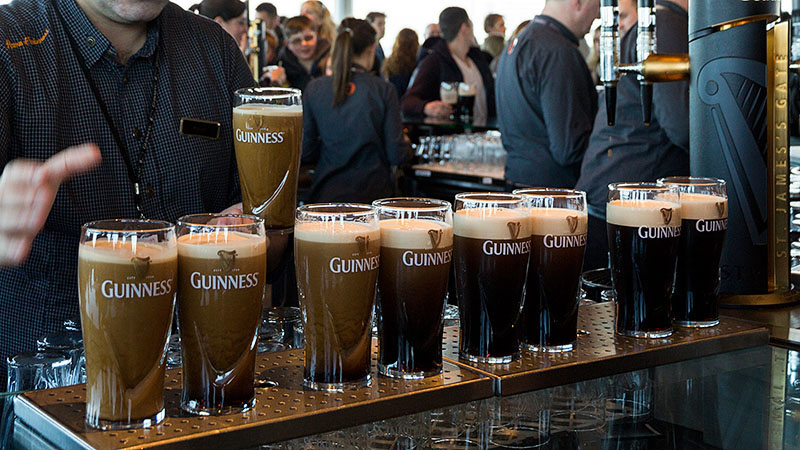 Our relationship with you, our clients, is what makes our work so rewarding.  We have been there through key family events and have vicariously traveled the world through your adventures.  One of our favorite travel stories comes from a couple in San Diego with whom we have worked for 22 years.

The husband, a Stanford educated doctor, had a passion for science which led him and his wife on a trip to pursue the unique geology of Ireland.  On the train toward their small-town destination, they engaged with many passengers.  Independently, each passenger recommended one particular pub.  Once settled, the couple strolled down the street to absorb the local culture and found themselves in front of the recommended pub.  The crowd, to their amazement, was backed-up all the way to the front door.  Eventually they worked their way to the bar and were asked what they would like.  Our client responded with, “What do you have?” to which the bartender offered a curt single word:  “Guinness.”

Apparently “there is no alternative” (TINA) at that bar. (1) Today the TINA term has been applied to the allocation of capital primarily toward stocks, suggesting that neither cash nor bonds presents a viable option.  How did we get here?

Our clients’ fascination with Ireland was based on the Giant’s Causeway, columns of rocks created from lava 50-60 million years ago that has been declared a World Heritage Site. (2)

Fortunately, we do not have to go back millions of years to understand the formation of the currently lopsided landscape in the cash and bond markets; only 108.

Alexander Hamilton originally conceived of a federal bank that could loan money to and handle government business.  Thomas Jefferson, who represented farmers, opposed the idea, and feared central government power.  The hodge-podge approach to banking resulted in numerous crashes culminating in J.P. Morgan (the individual, not the institution) bailing out banks with an emergency loan in 1907.  In 1913, and, during the Wilson administration, Congress created the Federal Reserve System.  After the Great Depression, Congress passed the Banking Act of 1935 and eventually established a dual mandate for the Fed:  full employment, and stable prices. (3)  Like the hot air balloon operator who must maintain enough air to stay afloat, but not enough to blow it up.

Growing the economy enough to create jobs but not enough to trigger inflation generally requires calibration.  However, as the graph below indicates, inflation has stayed below 4%, at least for the past 30 years. (4)

Globalization and automation have set structural deflationary forces in motion, relieving the Fed of their need to police pricing pressures.  While older generations remain sensitive to the negative impact of inflation in the 1970s, Millennials have enjoyed a lifetime of stable prices, leaving inflation, like discos or landlines, subject to the history bin.  The Fed, instead, could concentrate on the persistently sluggish economy.  The graph below demonstrates that the economic downturns associated with the Great Recession of 2008 and the COVID-19 collapse represent the two worst U.S. economic downturns in 60 years. (5)

The Feds’ balance sheet reflects their singular focus, having swollen from around $1 trillion prior to 2008 to $8 trillion today. (6)  Inexorable demand for Treasury Bonds and mortgage-backed securities has increased prices and driven yields down to near historically low levels.  The markets’ appetite for money funds with a yield near zero has, ah, dried up.  Treasury Bonds, despite providing some yield, fail to keep pace with inflation and expose investors to downside risk should interest rates normalize.  Cash and bonds, like wine and cocktails in an Irish pub, lack raving fans.

The French famously anchored their biggest guns toward Germany in WW II to fortify their position.  Unfortunately, the attack came from a different direction.  Are Fed troops currently locked in the wrong direction, overly committed to a single border, fighting yesterday’s battle with employment?  Are they vulnerable on the stable price front, to the risk of inflation?

Pretty convincing signs of inflation, at least through the rear-view mirror.  The question du jour is:  Are these inflationary forces transitory?

We do not have the bandwidth here to go through each of the economic pain points impacting oil, semiconductors, housing, and travel.  Instead, we present the powerful voices on both sides of the argument.  Lawrence Summers (former U.S. Treasury Secretary) and Ray Dalio (billionaire manager of the world’s largest hedge fund) believe that the U.S. is headed for a bout of persistent inflation that will derail the stock market. (11)  Goldman Sachs, conversely, cites the “unprecedented role of outliers” in driving inflation with “limited effects on longer-term inflation expectations.” (12) The loudest voice on the matter will be expressed by the Federal Reserve.  Despite their steady drumbeat of the “transitory” messaging earlier this year, the Fed seemed to roll over in June when they signaled that interest rates would rise sooner and faster than previously expected. (13) Yes, the tone reflects an increasingly hawkish stance, but the first expected interest rate hike is not until 2023, somewhat shy of a pending disaster.

Perhaps the more telling message can be seen in the graph following which captures the difference between the 10-Year Treasury Note and the Treasury Inflation Protected Securities (TIPs). (14) This measure has a good track record of predicting intermediate-term inflation.

Inflation expectations bounced between 1.5% and 2.5% in the past decade.  COVID-19 paralyzed the global economy and eviscerated any trace of inflation.  Since last year, however, vaccinations have paved the way toward reopening.  Consumers, with significant savings (15) and pent-up demand for travel and entertainment have sparked demand.  At the same time, supply chain disruptions related to Covid, have inhibited the ability to satisfy that demand, resulting in higher prices.  Since peaking at 2.5%, as seen in the circled section at the far right of the graph above, inflation expectations have cooled off since May.  The current implied rate of 2.3%, though towards the higher end of the past decade’s range, hardly seems threatening. (16)

Cash remains a Rorschach Test, with some repulsed by paltry returns and others seeing dry powder and flexibility.  Bonds energize the “Just Say No” crowd with yields below current inflation.  With less capital allocation between asset classes, we are starting to see a rotation within the stock universe.  To stay on theme, beer remains the beverage of choice, but it is not just limited to Guinness.

Finally, concern over the suddenly spreading Delta variant has shifted attention back to some of the “stay at home” stocks that had been out of favor for months.

Still, no real interest in wine or spirits, but an increased fascination with various styles of beer.

The financial landscape continues to exhibit unusual formations.  Artificially low yields on both cash and bonds have channeled capital into stocks.  Earnings expectations for 2021, at $191 for the S & P 500, put the price-to-earnings ratio at a lofty 22.8 times. (21)

If inflation persists, the Fed will have no choice but to move troops to the “other” border, allowing interest rates to rise.  They may get away with just talking tough, to reassure the financial markets that they will be vigilant.  If the economy cools down, if inflation expectations ease and interest rates remain low, stocks, regardless of style, will remain the drink of choice, despite the higher-than-normal valuations.

We continue to believe that Jerome Powell, head of the Fed and chief bartender, would prefer to err on the side of too much partying and therefore, see no imminent sign of Last Call.