Sad conclusion Mr. Earp, but understandable considering your life on the run.  We not only believe in reaching for destiny; our entire business mission is built around guiding you there.  Please consider us your financial shepherd.

This note will address the development of maps and some basic rules for the road.

Your current setting and your goals are unique yet the impact of inertia is undeniable.  If Taoism intersects finance it might say,” If you do not change direction, you will end up where you are heading.” Perhaps that represents your most treasured destination but we will demonstrate a spectrum of possible pathways.  The process is designed to stimulate a conversation that unveils a route that clearly reflects your personal values. What is more important to you, retire sooner or retire with a higher standard of living? Would you work longer for more financial security?  Would you accept a bumpier ride (portfolio volatility) for a higher standard of living? These are your decisions and it is our job to frame them simply so that you can weigh the relative attractions.

This might sound trite, but many financial journeys have been derailed by a defective vehicle.  Typical problems include insufficient liquidity, excessive debt and inadequate insurance. Good trip planning should assure these problems get addressed early.

Some investors believe that the efficient path forward requires switching your portfolio depending on the environment, in other words, tactical asset allocation.  We liken this to changing into or out of snow tires with the hope that precise timing can make up for the certain costs of buying extra tires, paying for both the swap and the storage. In addition, there’s always that clear warm day in February or the late April snowstorm that catches the driver off-guard, and potentially vulnerable.  Investing works the same way. One might aspire to an aggressive portfolio when the skies look clear and a defensive portfolio when clouds appear. Switching back and forth, just as using special purpose tires, generates costs (both trading fees and possible income taxes) as well as the risk of having the wrong portfolio when conditions change.

Consider two recent examples of famous investors who erroneously predicted “winter conditions” for 2016.  Carl Icahn’s hedge fund lost 20.3% in 2016 after going down 18% in 2015 – both positive years for the S & P 500. (1)  George Soros, legendary for once bringing the Bank of England to its knees, reportedly lost $1 billion betting against the stock market rally since the election. (2)  Bad forecasts and terrible results.

Your portfolio consists of five different asset classes including cash, bonds, large, small and foreign stocks.  Some serve a defensive role while others drive returns. Some zig while others zag to the same influences, by design.  For instance, recessions are not typically good for the stock market, but tend to increase the demand for and thus, the value of high quality bonds.  Conversely, an overheated economy might lead to higher interest rates which hurts bonds but increases the yield on cash. Foreign denominated investments typically do well when the U.S. Dollar weakens.  This deployment of “all weather” tires eliminates the need for, the cost of and the risks associated with frequent switching.

Driver’s education classes emphasize the need to look ahead.  New drivers exhibit a natural tendency to look at the road immediately in front of them and move the wheel back and forth attempting to track the turns.  Your financial trip should share that longer orientation.

Fear mongering is ever present and one can easily talk themselves out of the stock market.  Some “strategists” seek notoriety with bold predictions, sometimes about impending doom. However, the evidence makes it clear that, with few exceptions, being out of the market simply cost investors good returns.  Only five of the past 44 years produced losses in excess of 10%: 1973, 1974, 2001, 2002 and 2008. (3)   Each of these periods caused both stress and a step in the wrong direction of anyone’s journey.  But, the regression never lasted long. Consider the performance of the equity markets in the year following these bear markets. (4)

Constructing a balanced portfolio in 1973, with 70% in equities and the remainder in bonds and cash would have captured 92% of the total return of a pure stock portfolio through the end of 2016. (5)  Using the same 70% equity portfolio but looking at rolling 5-year periods since 1973 (1973-1977, then 1974-1978), there has not been a single 5-year rolling period that resulted in a negative rate of return.  This includes having 2008 in the beginning, the middle or the end of a period.

Or, don’t get distracted.  Considering the volume, the speed and the nature of the news flow, this represents a particularly timely reminder.

Optimism that Republicans, holding the White House and both sides of Congress, could deliver on both tax reform and infrastructure spending, helped to drive equity prices since the election.  The failure to reach consensus around a replacement for the Affordable Care Act has cast some doubt on the ability to implement a stimulative economic program, resulting in a flattening of the market.

Though politics dominates the news, we consider the behavior of the economy substantially more significant for the long-term performance of the markets.  As seen in the graph below, unemployment rates have reached pre-recession lows. (6) 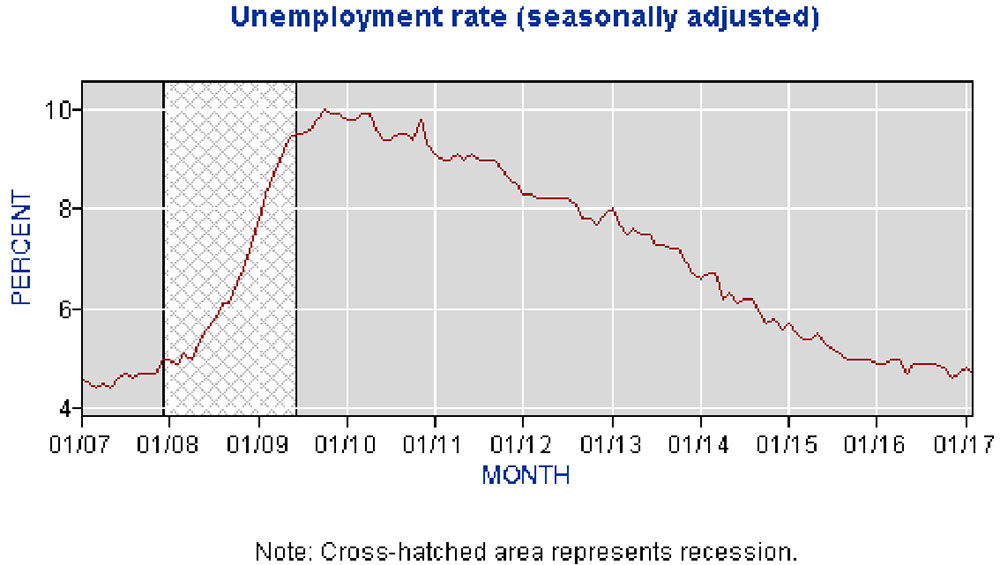 GDP growth exceeded estimates in the just completed quarter at 2.10%.(7) Consumer confidence, at 125.6 reached the highest level since 2000.(8) The economic landscape continues to look solid.

Rule #5:  Stop and Reset When Your Vision Clouds

Duke University, M.I.T., Cornell and The University of Chicago all offer Master’s Degree programs in behavioral finance. Self-inflicted wounds for investors fall into a few broad categories.  Anchoring involves the trap of getting stuck on a concept, such as price.  Consider the investor who purchased shares of Blockbuster Video or Radio Shack because they had dropped 50% in price.  That mental shortcut led to the false conclusion that each stock was “cheap”. Confirmation Bias is the tendency to read only information that supports a preexisting conclusion and avoid conflicting views.  This helps explain why bulls remain bullish and bears remain bearish, regardless of the facts. Putting too much emphasis on the most recent series of events, rather than a longer-term trend results in recency bias.

One should not assume that a baseball player who hits a home-run on opening day will end the regular season with 162.  These and other behavioral traps can be overcome with critical thinking, discipline and an investment committee and/or process that nurtures an environment of constructive conflict.

Wyatt Earp once said, “Fast is fine, but accuracy is everything”.  Considering that he was referring to gunfights, that opinion carries significant weight.  Moving too fast could invite an unwelcome confrontation with fate. Instead, we will continue to emphasize accuracy, critical thinking and thoughtfulness in helping you to create your own personal trail. We will check to assure that you have a safe car and will serve to remind you of the “all weather” nature of your portfolio. We will be there to fend off behavioral traps, for you and for ourselves.  We will do everything possible to assure that the well-earned destiny that draws you remains your ultimate path.