“The second fiddle. I can get plenty of first violinists, but to find someone who can play the second fiddle with enthusiasm, now that is a problem.”  - Leonard Bernstein; American Composer; 1918-1990.

The genius of your music, Mr. Bernstein, is unique; your challenge is not.

Mr. Bernstein would appreciate Gene Kranz. From his perch in Kennedy Space Center, Kranz headed the team of engineers who controlled each step of Apollo 11. He quietly celebrated on July 20, 1969 when Neil Armstrong stepped onto the moon and into a life of fame. Bernstein would have also admired Allan McLane. When the continental troops needed equipment, he spent down his inheritance. McLane warned George Washington about the suspicious behavior of Benedict Arnold. Despite his contributions, this second fiddle’s likeness neither appears on any U.S. currency nor any Washington D.C. monument.

Steve Jobs brilliantly led Apple, but Steve Wozniak both designed and built their first computer. Would Karl Malone have compiled more points in his career than Wilt Chamberlain or Michael Jordan if John Stockton wasn’t willing to pass?

Stocks, like the Neil Armstrong and George Washington group, soak up all the attention. We tend to focus on the ups, the downs, the expectations, and the frustrations of stocks, while remaining quiet on the subject of bonds; the financial market’s own version of second fiddle. Not anymore. Today’s note will focus on the role of bonds in your portfolio and our current strategies in this area – hopefully without getting too bogged down in wonkish terminology.

Bonds represent a loan from an individual (the investor) to a company or a government entity (the borrower). Usually issued at a fixed rate (the coupon rate) for a fixed period of time (the maturity), bonds typically trade in $1,000 increments and pay interest semi-annually.

If you loan the U.S. government money for 90 days, they will issue you a Treasury bill. Today’s current yield, just under 0.40% per year, reflects the lack of risk. The financial markets loathe uncertainty and accept abysmally low returns to avoid the capricious nature of alternative investment options.

Investments that earn 1% per year or less can be an understandable source of frustration. Do you really need bonds?

Strategic asset allocation, the theory that earned Sharpe and Markowitz their Nobel Prize in Economics, pivots on rebalancing a portfolio between various asset classes that do not move in tandem; assets like stocks, bonds and cash. Bonds, as “best supporting actor”, play the critical role in a portfolio of helping to reduce the inherent volatility of stocks, compressing the roller coaster ride of equities into an emotionally bearable band.

Can you buy bonds that yield more than the 0.40% “risk-free” return on Treasury bills? Yes, but reaching for higher potential yields necessitates the acceptance of the risk associated with longer maturities, lower quality borrowers, or uncertain currencies. Let’s examine each of these risks.

The Treasury Yield Curve, below, depicts the relationship between maturity and yield, logically sloping upward. The longer an investor must wait to get their money back, the more things that can go wrong, and the higher the return demanded for assumption of that risk. 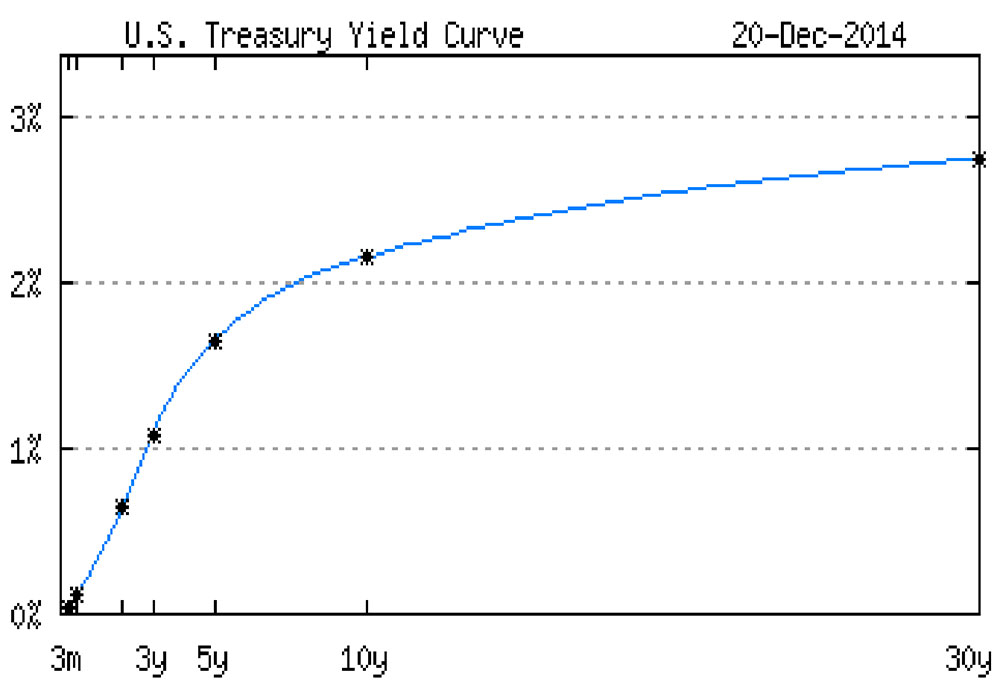 Even loaning to the U.S. government, with virtually zero chance of default, exposes an investor to the risk of rising interest rates.

Bond valuation depends almost exclusively on pure mathematics. The subsequent chart shows the impact of 0.50% and 1.50% increases in interest rates from a base yield of 2.50%.

The longer the maturity, the greater the sensitivity to changes in interest rates. The 20-year bond, in the example, has three times the downside risk of the 5-year bond, including the potential for a 20% haircut – the kind of jolt many investors believe only possible from stocks.

The second approach to increasing bond yields entails the acceptance of a lower quality borrower than the U.S. government. Corporate bonds derive letter ratings from Moody’s or Standard & Poor’s that slide down from AAA (Exxon or Johnson & Johnson) to AA, A, and BBB (Citigroup). Bonds rated lower than BBB constitute the “high yield” market, AKA “junk”. With each step down in quality, the buyer gets a bit more yield; a biscuit for accepting the ever increasing risk that the borrower may fail to make full payments of interest and principal in a timely manner, i.e., default.

In addition to interest rate and credit risk, non-U.S. bonds introduce currency risk. For instance, an American investor could purchase a German government bond that matures in four years and would avoid most interest rate risk and credit risk. Still, one could experience volatility in pricing if the dollar strengthened against the Euro. Each Euro earned on the bond would buy fewer dollars as the Euro weakened.

The WCF Mission Statement focuses on our intention to reduce your stress around finances. Moreover, our explicit investment objectives focus on the quest to provide index-like returns over an entire market cycle – but with a smoother ride. Our investment committee, consisting of the five senior advisers in the firm, must gauge the current environment and determine whether the extra yield being offered in exchange for longer maturities, lower quality, or foreign currency warrants assuming a greater level of risk.

Interest rates continue to bounce around at historically low levels despite:

We believe that rates will eventually rise, and when they do, as demonstrated above, the value of existing bonds will drop. We cannot justify extending the maturity of bonds today for the small incremental improvement in yield.

Economic growth should stimulate revenues and earnings, and improve the ability of individual companies to meet their debt obligations (1). In addition, Fitch, one of the big three rating agencies, projects a default rate between 1.5% and 2.0% in 2015, compared to the 34-year average of 4.3% (2). Although both of these facts support high yield bonds, slumping oil prices might dampen some of that optimism. The energy sector now comprises 17% of the total high yield market. The graph below shows the spread between high yield and treasury bonds for the past 20 years (3). 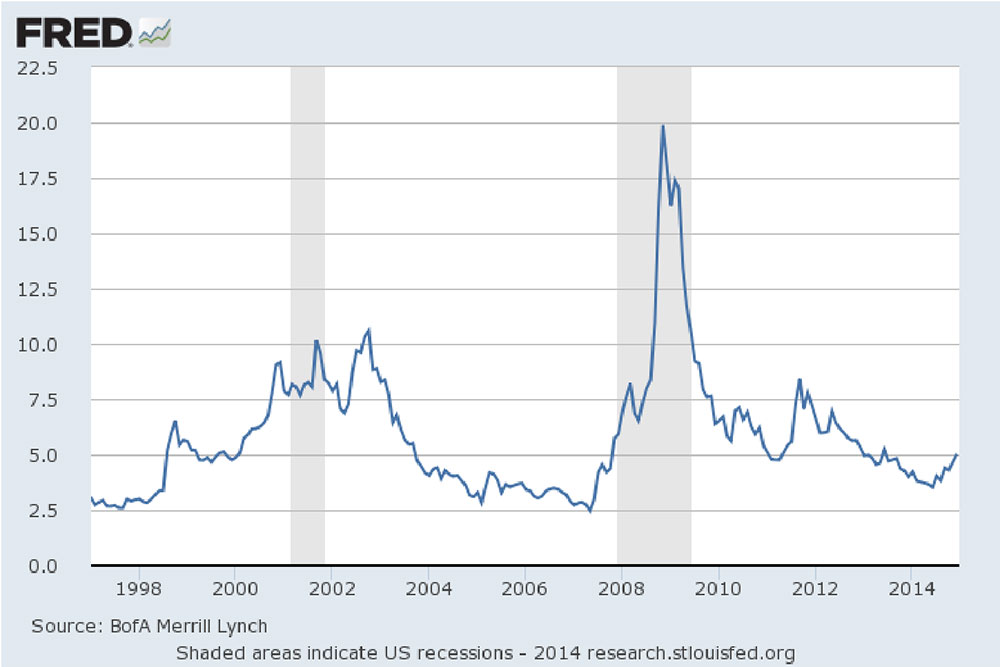 Spreads exceeded 20% at the peak of fear in 2008 but have slid back to pre-recession levels. Are the extra returns on high yield enough to seduce?

The short-term costs and long-term benefits of neglecting high yield cuts through the essence of our entire investment thesis. We seek diversification to smooth out the intrinsic bumps caused by equities – high quality bonds accomplish that mission. High yield bonds, however, tend to behave just like stocks during periods of market stress. Demonstrated in the graph below, one can clearly see the divergent behavior between high quality (BarCap) and high yield in the market meltdown of 2008. 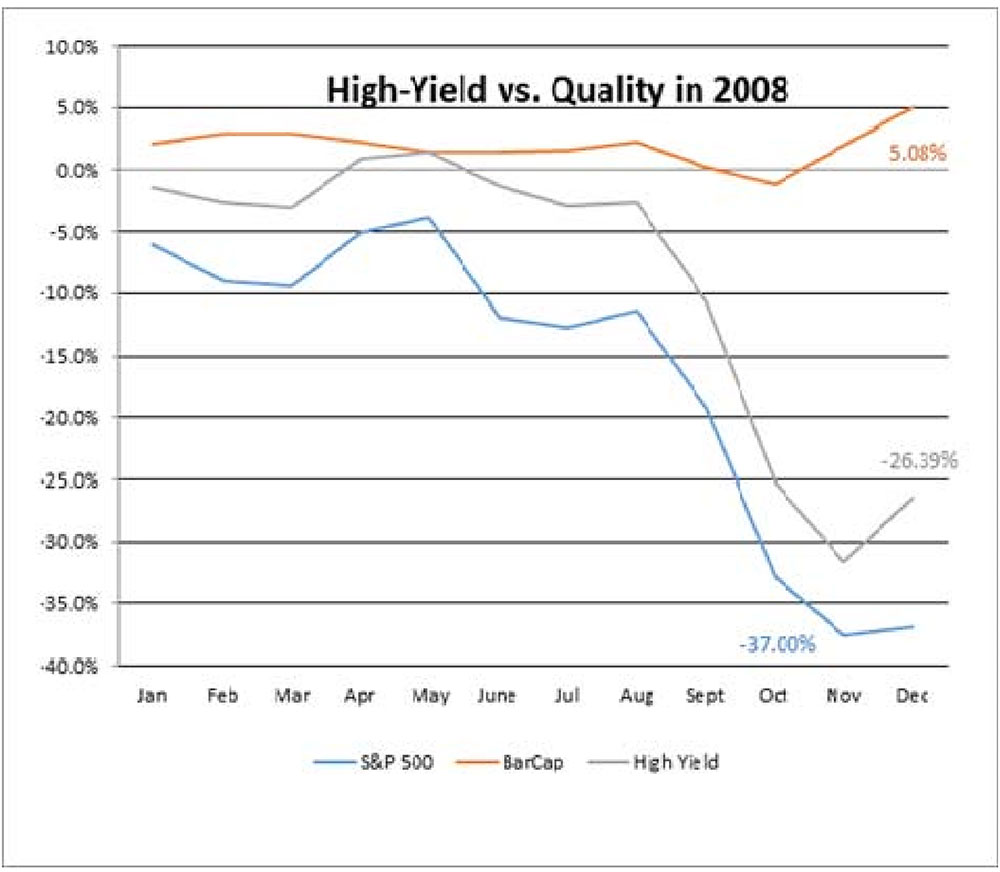 We do not find the high yield spreads sufficiently rewarding to give up the potential benefits of buffering the portfolio from volatility.

Of course, to get returns above Treasury yields does not require going all the way down to “junk”. In fact, we continue to find value in tradable certificates of deposit that include federal insurance. C.D.s currently pay about 0.50% higher than a five year government bond – significant off of a base of only 1.65%.

Spanish for “keep safe”. Investing outside of the U.S. represents one way to potentially reduce both interest rate risk and default risk in bonds. Globally, interest rate cycles do not typically move in perfect tandem. This diversification works in your favor. We dedicate a small part of your fixed income portfolio to non-U.S. bonds and we usually use mutual funds that eliminate currency risk.

Taxation represents a separate and unique issue that we integrate into taxable accounts. Municipal bonds produce income generally exempt from both state and federal income taxes for residents. Within this universe we must still be disciplined with regards to both credit quality and maturity.

Despite our reading of the economy and the financial landscape, we refuse to “move all of our troops to one border”. For several years we expressed a high conviction level about rising interest rates, only to be proven wrong in each of those years. To maintain flexibility, we have included some mutual funds that provide the manager with the latitude to move across quality and geographic boundaries according to market conditions.

We have demonstrated that both longer term and lower quality bonds offer the potential to drop by 20% in a single year. Today, with high interest rate risk and uninspiring high yield spreads, we view neither option to be worth the risk.

Reaching for yield today is tantamount to increasing the deductible on your homeowner’s insurance. Yes, you could save some money in premiums each year; but is that the right decision, knowing (on the basis of stock market history) that your house is likely to catch on fire every three or four years? Thus forms the basis of our conviction that the short-term benefit is not worth the long-term risk.

Volatility is a fact of life with stocks, and rather than fight those cycles, we want to take advantage of them. We want to buy equities when they are down, but some portion of the portfolio needs to hold up under stress. Our confidence in executing strategic asset allocation for your benefit stems from the knowledge that your bonds will play the second fiddle with enthusiasm; holding up in most periods of market stress and providing us with the dry powder and liquidity to act when stocks go on sale.

In crunch time of a basketball game the coach did not hand the ball to Karl Malone: he handed it to John Stockton who would read the defense, adjust his offense and get the ball to Malone at the right time and in the best possible position. We expect nothing less from the bonds in your portfolio.