Surprise indeed.  The same group of experts that missed BREXIT were right back at it on Tuesday, November 8, 2016.  This note will focus on the financial markets heading into the election, how we were postured, how the markets responded, and potential changes in our strategies.

The “V” below depicts the flat market before the FBI report implicating Clinton, the rapid decline on the news, and the recovery on her being “cleared”, several days in advance of the election. (1)  The S & P 500 closed at 2139 the day of the election. 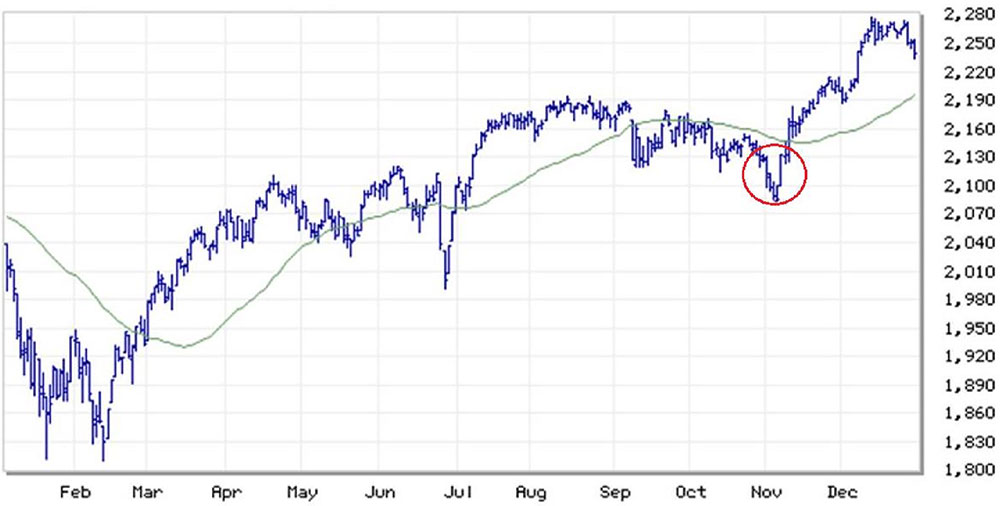 In October of 2016 we wrote that it would be “recklessly indulgent” to invest your money based on how we thought the election might play out.  We noted the difference between words and intentions, between intentions and action, and the lack of empirical data suggesting that Presidents wield much influence on stock market performance.  We provided a graph showing the long term upward trend of the stock market and the perils of bucking that trend. We remained fully invested heading into the election.

When the swing states of Pennsylvania, Florida and Michigan pointed toward a Trump victory the evening of the election, stock market futures traded down by the maximum limit.  However, on Wednesday, November 9th, the surprises kept coming. The stock market not only recovered, but finished up. Conventional wisdom was wrong about the election and wrong about the response.

With unemployment at the lowest in 10 years, the bond market confirmed the expectation for economic growth.  The 10-Year Treasury yield, as seen in the chart below, moved from 1.85% all the way up to nearly 2.6% -- a loss of approximately 6.6% in value, since bond prices fall when yields rise. (2) 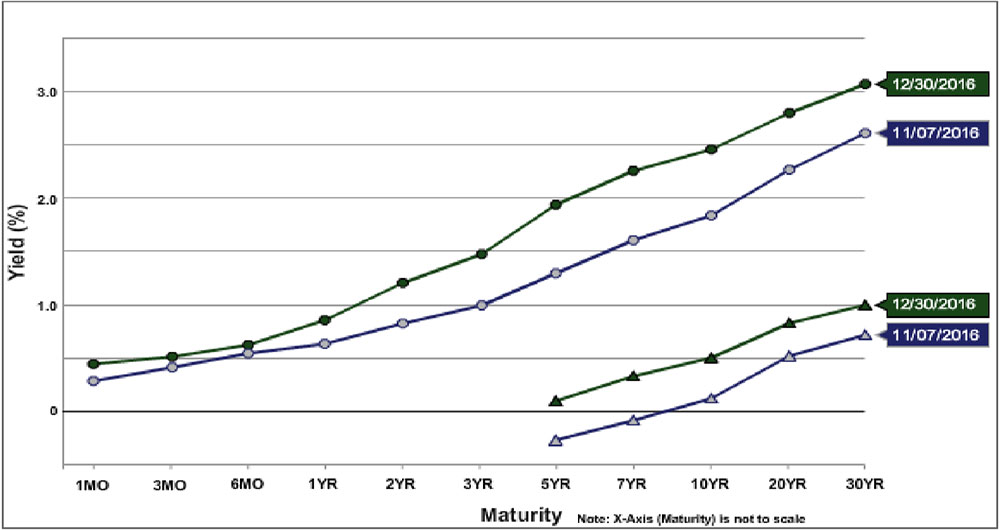 Changes in Our Strategies

So much change.  Should we adapt new strategies?  Some of you may have been fortunate enough to see Tony Bennett’s 90th birthday celebration at the end of December that culminated in his singing “How Do You Keep the Music Playing?”:

How do you not run out of new things to say?
And since we're always changing
How can it be the same?
And tell me how year after year

These lyrics inspired us to re-examine what we have said to you in our market commentaries over the years.  We thought it might be helpful to review some of our strongest convictions and most frequently discussed themes to determine whether any warrant reconsideration after the surprise election results.

Financial Planning:  We see financial planning and investment management as being inextricably linked.  Detailed analytical planning work frames the investment issues and provides context for both risk and returns.  What rate of return do you need to achieve your goals? Can you endure the volatility associated with reaching for those returns?  With few exceptions, most individuals are not afforded the luxury of investing only in money market funds and bonds.

Market Corrections:  Owning equities means being, at least to some degree, on the roller coaster.  Large cap U.S. stocks tend to produce negative returns in about one out of every four years -- S & P 500 losses since 2000 include years of -9%, -12%, -22% and -37%.  Market corrections (defined as a downward movement of at least 10%) are, unfortunately, part of the experience of equity investing, occurring, on average, once every 20 months.

Market Timing:  What if you can’t retire on Treasury Bills but don’t really want to be in the stock market when it drops 37%?  Jump into and out of the stock market? Though emotionally seductive, there’s scant evidence of anyone successfully timing the market over long periods of time.  In October 2012 we drew a parallel between the rock opera “Tommy” (the deaf, dumb and blind kid who sure played a mean pinball) and successful investing. The key is to avoid the bells and whistles coming at you that could scare you out of the market.  Peter Lynch (star manager at Fidelity Magellan) said “Far more money has been lost by investors preparing for corrections, or trying to anticipate corrections, than has been lost in corrections themselves.”

Modern Portfolio Theory:  Having equity exposure but not jumping in and out of the market requires a discipline based approach for managing the inherent volatility.  We employ a form of modern portfolio theory, a simple strategy based on work done by Professors Sharpe (Stanford University) and Markowitz (University of Chicago), who both later shared a Nobel Prize in Economics.  A fixed target allocation is assigned to stocks, bonds and cash. Rebalancing back to fixed targets naturally leads to selling into strength and buying into weakness – a structural orientation toward contrarian investing. The strategy relies more on discipline than insight and eliminates guesswork.  We have frequently emphasized the role of cash (Buffett refers to it as a call option on all other asset classes), bonds (we referenced Leonard Bernstein on the role of the “second fiddle” in a successful orchestra) and stocks of all sizes and geographies. In October of 2014 we drew a parallel between betting on horse racing and the annual performance of stocks, bonds and cash.  Each component plays an important role in the overarching strategy because they tend to react differently to the same stimuli. We have consistently relied upon asset allocation and rebalancing for decades.

Predictions:  In July 2007 we quoted Yogi Berra who said, “It’s tough to make predictions, especially about the future”.   Nassim Nicholas Taleb wrote “The Black Swan”, an exceptional book that helps explain the risks associated with using history as a guide for the future.  We have, over the years, made several metaphorical references to our refusal to put all of our troops on one border, while leaving other lines unprotected – rendering us vulnerable to surprises.  In October 2016 we refused to make bets on the pending election.

Fundamentals:  In January 2006 we quoted Fleetwood Mac, “Don’t stop thinking about tomorrow” to describe the stock market’s forward looking nature.  In October 2006 we referenced Orville Wright, who relied on sound fundamental principles to achieve flight. In January of 2009 we referenced Warren Buffet by saying that the stock market may be a voting machine in the short run, but that it was a counting machine in the long run.  We applied this in explaining why, after such a nasty bear market, we were buying both stocks and California bonds -- each extremely out of favor at the time.

Indexing:  In January of 2014 we quoted Warren Buffet as being a fan of indexing (though he clearly does not follow that strategy).  We too see the merits, but not because of a secret formula. Indexing success stems from staying fully invested (avoiding the pitfalls associated with inaccurate predictions), and low fees.  We believe these underlying strengths can be replicated without the momentum traps of indexing that led to technology representing 35% of the S & P 500 in 1999 – on the eve of the dotcom bubble collapse.

Home Cooking:  The single strongest value held by and acted upon by WCF is to absolutely align our interests with yours.  We wake up energized every day in part because of our mission to eradicate the transaction based business model that Wall Street has been built upon.  You will not see an investment opportunity from us unless we have decided to invest our own money in the same manner. We have structured our firm to attract and retain partners, not “customers”.

After the knee-jerk negative response on election night, the markets concluded that Trump policies would stimulate the economy and drive employment gains, corporate sales and – because of expected lower tax rates and reduced regulations – increase profits.  Wall Street forecasts for earnings on the S & P 500 are now projected to rise to around $130 for 2017. (3)  The S & P 500 closed the year at 2238, about 16 times forward earnings.  Higher than historical averages, but not by much. Small stocks (less vulnerable to a rising U.S. dollar) are more expensive, foreign stocks cheaper.

The bond market senses the same dynamic.  More borrowing to support more spending to employ more people.  Inflation expectations that were down to 1.7% in November are just about 2.0% today. (4)  The majority of dollar gains in the stock market can be directly traced to dollar losses in the bond market. (5)   Stimulating the economy with unemployment at 10-year lows does not excite Fed Chair Janet Yellen.  The Federal Reserve Board voted for a one-fourth percent interest rate hike in their December meeting and discussed plans for three additional rate hikes in 2017. (6)

Keep in mind that the artificially low interest rates have supported the stock market in the past seven years by: (1) Making bonds less attractive, (2) Facilitating a rebound in the housing market and (3) Making it easy for corporations to borrow money and buy back stock.

Consumer confidence reported on December 27, 2016 came in the highest since 2001. (7)   Good economy, good earnings.  However, those expected higher profits are mitigated by higher inflation expectations (8) and higher mortgage rates. (9)

Add in the uncertainty of potential tariffs and any potential interruption to global trade, along with not so cheap stock valuations, and we confess to not sharing the stock markets’ recent excitement.

We remain highly confident in the diversification and built-in discipline associated with asset allocation and rebalancing.  Cash, bonds and stocks work like instruments in an orchestra, each playing an important role.

In short, the upheaval of the past two months only serves to reinforce our belief system.  Keep in mind that the “system”, though dependent on discipline, does not ignore judgment. We still search for stocks that meet our long standing strict criteria for balance sheet strength, profitability and valuation.  We maintain shorter maturities with bonds because we don’t see much value in 10-year Treasuries yielding only 0.45% per year more than inflation. (10)  Tony Bennett belted out, “The best is yet to come”. Perhaps, but we will stay positioned for those surprises.