Forget the Kentucky Derby.  Forget the Preakness. The biggest horse race starts January 1st every year; runs 365 days, and always features the same five horses – cash, bonds, large stocks, small stocks and foreign stocks.  This letter will focus on the history of each of these horses, the current handicapping and reflect on appropriate strategies.

America loves underdogs and cash runs slowly – consistently.  In the 41 years we have been tracking this race, cash has a dismal record of winning in only three of those years – 1973, 1974 and 1981 – all periods marked by high inflation.  Cash does, however, provide some unique attributes. It never goes down in value. It can buy goods and services without having to be sold and can be used to buy stocks when they are down in the dumps.

Yielding close to zero today, cash represents a tough bet to win right now.  In essence, expecting zero to win distills down to a forecast that the other horses won’t finish the race.

The following graph depicts the history of interest rates in the U.S. going back to 1960 (1).  Rates rose steadily for the first 10 years before colliding with the perfect storm of the 1970s that included:

Paul Volcker, then head of the Federal Reserve, exercised resolute determination in wringing inflation from the economy through a prolonged period of interest rate increases.  Nobody wanted to own bonds in the 1970s. 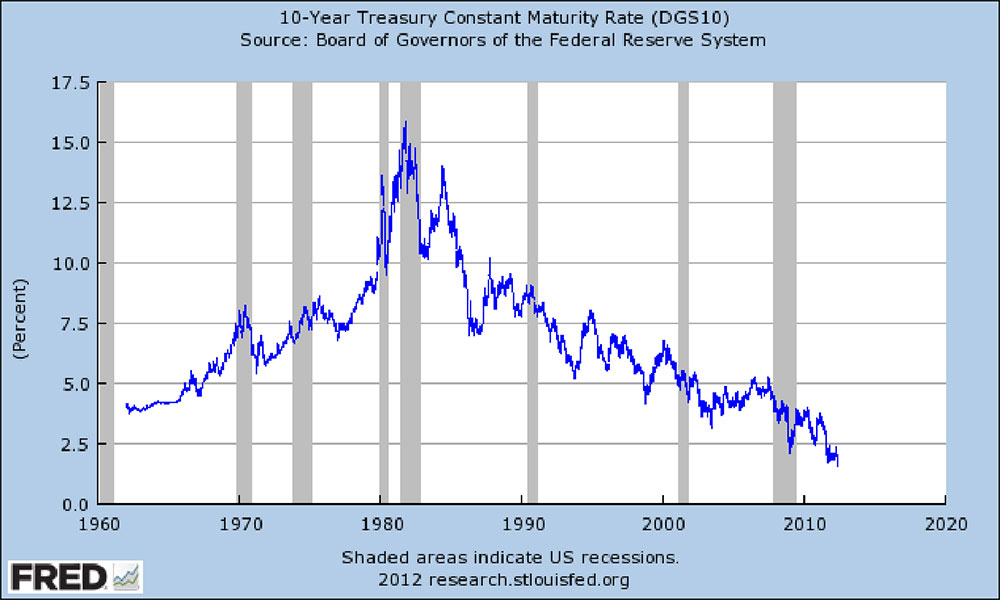 In 1981 money market yields reached 14%, finally squashing inflation.  The Fed could begin the process of allowing rates to “normalize”. Despite (or maybe because of) a 20-year antipathy toward bonds, savvy investors did extremely well locking in those high rates by purchasing bonds, the longer term the better.

Rates moved downward for most of the next 22 years; reaching today’s historic lows.  It might surprise you to learn that bonds (2-10 years in maturity and high quality) actually won this horse race in nine of the 41 years since 1973 – more than statistical averages would suggest.

We have maintained a defensive position in bonds for the past several years by keeping maturities shorter than normal. This year seemed like everything lined up to finally make this decision appear “smart”.  After all, substantial quantitative easing efforts produced a virtuous cycle of cheap borrowing costs that helped enhance the wealth effect and led to rising consumer confidence and spending that created more jobs.  These actions and reactions resulted in Gross Domestic Product growing at a 4.5% pace in the just completed quarter. (2)  Unemployment, 10% at the trough of the cycle, dipped to 5.9% this week (3). For the first time in over five years the Federal Reserve Board is preparing the financial markets for rate increases.

We would have pegged bonds to bring up the rear this year... but, not so fast!  The budding U.S. economic recovery and relative sputtering in Europe and Japan motivated economic leaders overseas to implement more aggressive Quantitative Easing.  Catch-up intervention overseas served to push down bond yields and created the following:

Rates in the U.S. are low by historical standards and even low compared to inflation.  Bonds offer a lower yield today (higher price) than at the beginning of the year. Yet, beauty is in the eyes of the beholder and foreigner buyers like what they see.  Tough horse to handicap.

Definitely the regal horse on the track;   the New York Stock Exchange opened in 1817 and rivals Melrose Place and Peyton Place with a “location” centric T.V. show.  Illustrious constituents include global brands such as Nike, Apple and Coca-Cola. Don’t judge a book by its cover. Big U.S. stocks won the prize in only six of 41 years – seriously.  More often than cash, but not as frequent as bonds.

Who likes this bet?  Momentum players – those who believe that winners keep on winning.  Large cap U.S. stocks, on track for their sixth consecutive positive year, seem to be the only horse running this year.  Unlike the surprise performance of bonds, large cap stocks make perfect sense considering true economic traction in the U.S. and a surging currency, combined with the unexpected and further easing of interest rates.

The small guys epitomize the entrepreneurial spirit of America – or, as Wide World of Sports once described, “The thrill of victory and the agony of defeat”.  Small stocks have won the horse race in 11 years and sometimes by spectacular margins. In approximately one out of every eight years small cap stocks have delivered returns in excess of 40%.  For symmetry though, the juniors wilted by more than 15% in an equal number of years. In the two calendar years from January 1, 1973 to December 31, 1974, every dollar put into the Russell 2000 (index of small cap stocks) turned into 32 cents – and that is not a typo. Definitely the wild stallion.

Offering an alluring and easy to understand story, small cap stocks performed quite well in the past six years because of their tendency to outperform other assets after recessions.  Moreover, if only the U.S. economy grows while the rest of the world stagnates, why not own stocks of companies that only (or primarily) sell into U.S. markets; shunning the headwinds abroad?

Off the radar screen, right?  No T.V. show. Not typically discussed at social events.  The MS EAFE index (like the S & P 500 but for developed foreign stocks) consists primarily of Japanese and European stocks, neither inspiring much confidence of late.

Foreign markets tend to run in streaks.  Japan, much like China today, seemed poised for global economic dominance in the 1980s.  The U.S. created everything, only to see Japan produce it cheaper, faster and with higher quality – think Toyota and Honda.

Japanese stocks, down about 5% year to date, represent 21% of the index.  Japan suffers under the weight of the highest debt ratio in the industrialized world, an elderly population, high life expectancy, the lowest birthrate and a refusal to allow immigration.

Europe?  Only a few years back the media coined the acronym PIIGs, to highlight the countries (Portugal, Italy, Ireland and Greece) taking Europe down. The economic recovery in Europe grossly lags that in the U.S. for a multitude of reasons including:

One can bet on a single horse, but really, which, one?  Cash with the no-yield? Bonds, at seemingly historical highs?   Large stocks have caught the fancy of foreign buyers and boost “momentum”.  Small and foreign stocks feature admirable long term records.

Of course, nobody would ride a single horse every year.  The success of any horse in any race depends on track conditions, the weather, the time of the race, health of the horse, and of course the jockey.  This makes perfect sense so why not apply the same process to picking the winning asset class?

Yes, monitor the economy, interest rates, the political landscape, tax policy, technological innovation, health patterns and even the weather and then simply pick the best asset class.  What a fantastic idea in theory and an eternal fountain of stories, charts and debates for presentation on CNBC. The entire process of reading tea leaves and allocating capital constitutes Tactical Asset Allocation and only has one problem:  research suggests that it doesn’t work (4).

But the horses run every year and the media revels on both observing and handicapping the race. The recent relative strength exhibited by large cap U.S. stocks seems to draw interest from those so inclined to bet on a single horse.

Consider the graph below depicting the divergence between U.S. large cap (blue line on top) and foreign stocks (green line on bottom) in the past six months. 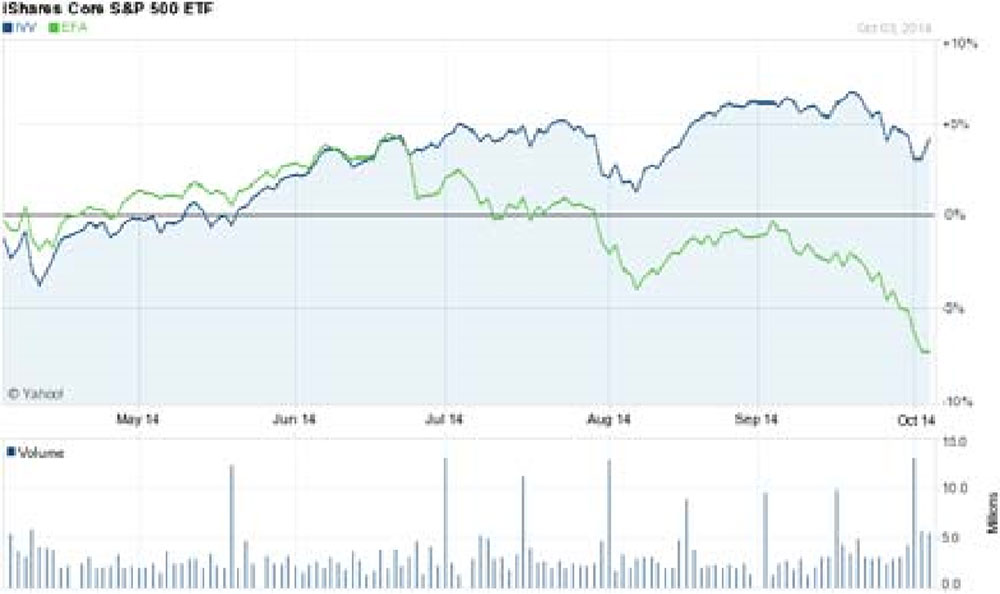 Not exactly shocking, the graph depicts previously discussed issues such as U.S. growth and the attraction of the U.S. currency. 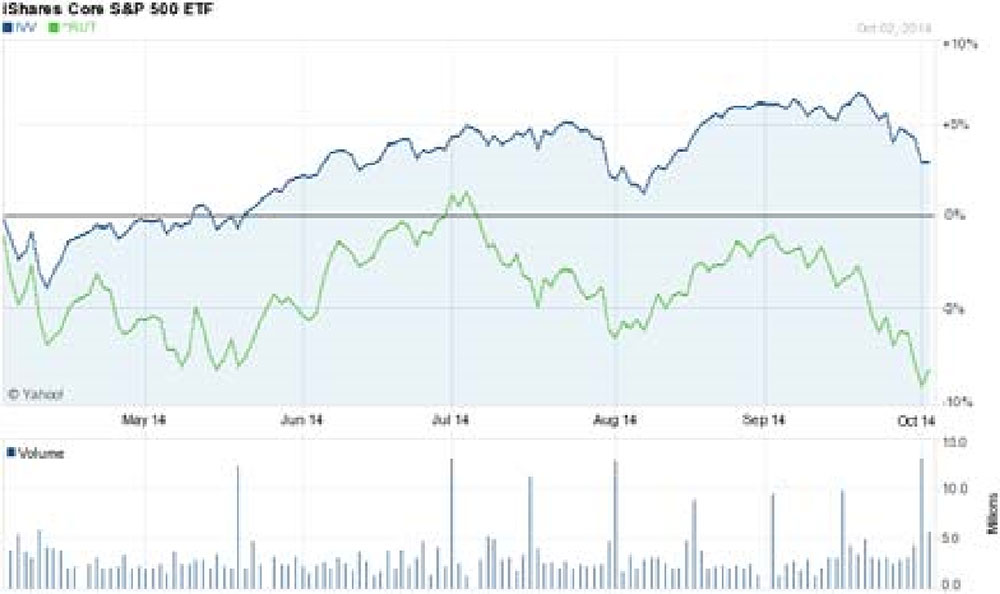 Our response?  Sigh. We remember the 1990s too vividly.  From 1996 to 1999 large stocks were to investing what Man O War was to horse racing in the 1920s – seemingly unbeatable.  Lucent, AOL and Yahoo were the darlings and the momentum of the S & P 500 drained capital out of small and foreign stocks.  Until, of course, those horses collapsed at the end of 1999. In the aftermath of the Internet Bubble bursting, foreign stocks clobbered U.S. stocks for six consecutive years regenerating conviction for asset class diversification.

In order to honor all of these values and focus on your attainment of financial goals and objectives, we must deploy a strategy with a high level of discipline and an emphasis on the management of downside risk.  Not even “wild horses could drag us away” from broadly diversified portfolios and rebalancing.