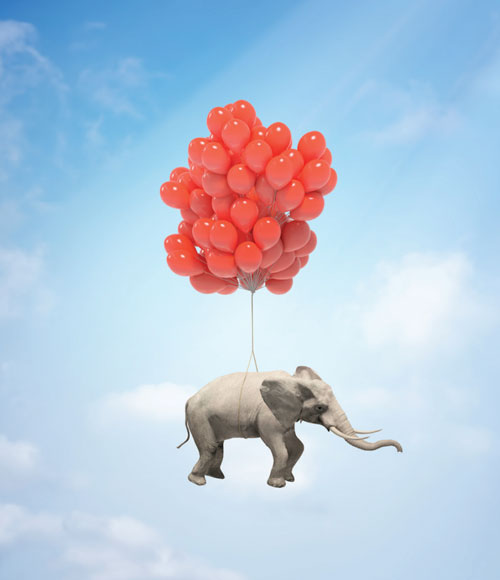 “Well I seen a horse fly I seen a dragon fly
I seen a house fly
But I’ve been, done, seen about everything
When I see a elephant fly”
—Dumbo; Disney Studios; 1941

The Economic tab during 2020 includes:

The damage and pain associated with school closures (impacting both learning and parenting), depression, and violence, cannot be measured. Though nearly one year into Covid-19, the U.S. is losing approximately 3,600 lives a day to the disease. (6)

Maybe Sting said it best, “Lest we forget how fragile we are.” (7)

Fragile? Perhaps, but also resilient. As the chart below indicates, the stock market rallied off the March nadir (circle on left), recovered (circle on right) and ultimately soared. (8) We’ve seen recessions, corrections, recoveries, and two of the nastiest bear markets in history. But now, we’ve seen everything; including the stock market mimic an elephant in flight. 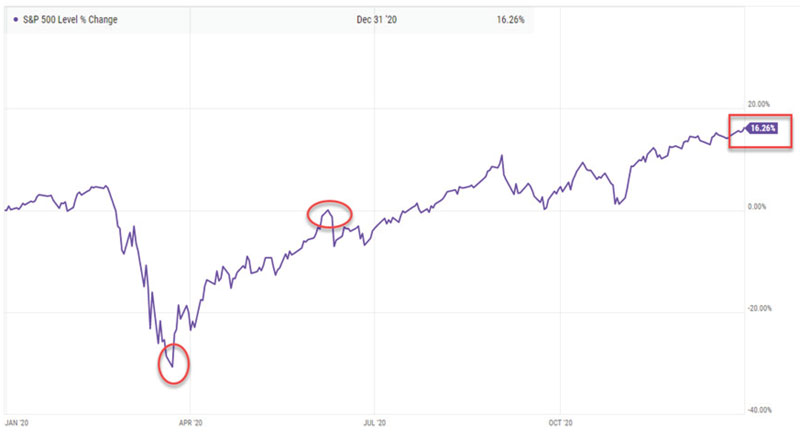 What propelled that elephant? The evident catalyst, addressed in our note last quarter, was government intervention. The Federal Reserve Board expanded its balance sheet from $1 trillion to $7 trillion, dropped interest rates to near zero and purchased bonds in the open market. (9) Congress passed the CARES Act, applying an additional $2.2 trillion using a variety of re- lief strategies. (10) The combination, $8.2 trillion, dwarfs the annual economic output of Japan, the third-largest economy in the world. (11)

The more nuanced reason lies with the nature of the virus. It’s important to understand how it moves, how it ends and how society reacts.

Nature of the Virus

Most of the damage from these pandemics occurred before the U.S. built massive wealth, advanced sanitation, clean water, safe food, modern medicine, and the Internet for sharing information. Yale professor and physician Nicholas A. Christakis refers to the U.S. as the “cumulative culture” (15) because we have access to all the science, art, and inventions that occurred before us. Humans are at the top of the food chain for several reasons, one of which is our unique ability to both teach and learn.

Nonpharmaceutical interventions can drive cases to zero (Wuhan), but create a “false bottom.” Flattening the curve did provide the opportunity to study the virus, build up PPE inventories, figure out therapies, and initiate vaccine development.

Herd immunity occurs naturally (without vaccines) when a sufficient portion (maybe 60-80%) of the population develops antibodies from exposure. Christakis suggested this would occur by 2022, absent an effective vaccine. However, with only a 6% confirmed infection rate, reaching this milestone would entail considerable human suffering and pressure on an already over-taxed healthcare system.

Thus, the emphasis on vaccines. China sequenced the genetic code of the virus and shared it, all 29,903 letters, with the world (16) 60 days prior to WHO’s March 11, 2020 declaration of Covid-19 as an official epidemic. (17) Moderna took a mere 42 days to deploy that sequencing data into the first vaccine trial. (18) Today there are 53 different vaccines being explored and three already approved. (19) Johnson and Johnson could have their vaccine on the market as soon as February. (20)

To summarize, Covid-19 ravaged the global economy, stirring governments to respond with all available tools, generating vast liquidity and historically low interest rates. Return-seeking capital gravitated out of bonds and into equities. Stocks are forward-looking assets. Confidence that the virus will soon dissipate has buoyed stock investors.

Where are we heading? The answer depends on three powerful forces: economic growth and Fed policies, both on a collision course with valuation.

Though strong economic growth is typically associated with tighter monetary policy, the Federal Reserve Board has explicitly stated their intention to keep short term rates near zero for an additional three years. (25)

Not only is the economy poised to grow and interest rates to remain low, but productivity (output per hour worked) has surged due to increased use of technology. (26) This translates directly into higher operating margins and thus, higher profits.

Many observers will suggest that the preponderance of good news is no secret…that the elephant is in flight.

Fortunately, both the 2020 returns and the valuation of the S & P 500 largely reflect a handful of technology stocks. The “other 495 stocks” were up by just 3% in 2020, leaving ample room for further advancement. (29)

Bonds offer a ballast for the innate volatility of equities and provide some cash flow, but generally fail to keep pace with inflation today.

Though inflation expectations have risen off the summer 2020 lows, they remain at about 2%, almost identical to the summer of 2019 level. (30)

“What’s true of all the evils in the world is true of the plague as well. It helps men to rise above themselves.” (31) Let’s hope so, as we close out the most challenging year of a generation.