In August, we wrote Should You Defer Taxes In 2020? In this article, we will expand on some of the ideas introduced there, and explore the more general concept of deferring and accelerating income throughout a longer period of time to minimize taxes. 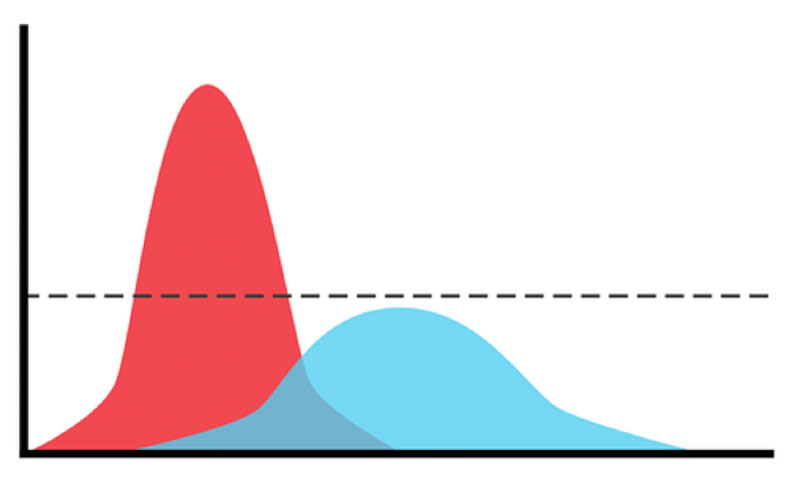 We have all seen the above graphic and learned the expression “flatten the curve” because of COVID-19. But did you know that flattening the curve of your income taxes can easily be worth hundreds of thousands of dollars over a lifetime?

This post will be an exploration of that concept.

How to Flatten a Tax Curve

Let’s begin with an example! If we have twins, Rob and Joe, who are alike in every way, except that Rob likes to work extremely hard for one year (he is ten times more productive than your average Joe) and then take the next nine years off, while Joe likes to work at a steady pace.

If Rob earns $1 million during that working year, he will pay almost $330K, or 33%, in Federal income tax. That will leave him $670K for sipping cervezas by the beach for the next 9 years.

Rob will end up paying more than twice as much in Federal income taxes as our steady friend Joe, who will get to keep an extra $178K, nearly 18% of his income! Rob got to keep $670K, Joe got to keep nearly $850K!

How Can That Be?

The reason Rob and Joe received such disparate tax treatment is our “progressive income tax.” Higher earnings are taxed at higher rates. See here for a Brief Overview of Federal Income Taxes.

To think about it another way, each year a taxpayer has the opportunity to fill up each tax bracket “bucket.” Because Rob only earned income for one year, he only used each bucket once, including the very valuable 10%, 12%, 22%, and 24% buckets. He left nine years’ worth of 10% and 12% buckets totally unutilized! 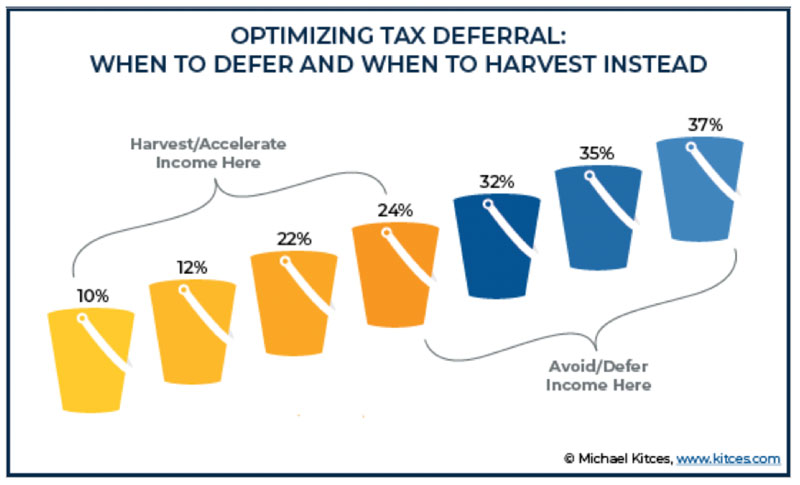 Very few people like Rob exist in the wild, so our first example might seem a little outlandish. However, we can apply the lessons we’ve learned to a common retirement planning scenario.

The key facts of the situation usually look something like this:

By the time they are into their 70s, their annual taxable income likely has a high floor, given Social Security, RMDs, and any other pension or real estate or regular portfolio-based income. Income could easily be above $85K, where the 24% tax bracket begins for single filers.

Said more concisely: once they are 72 years old, they can expect to always be in at least the 24% tax bracket.

Time and clever planning, however, are on our side. If they are retiring at 62, we have a crucial decade-long window for optimal tax planning. There are many ways to take advantage of being in a temporarily low tax bracket, but a common and illustrative planning option is called “annual partial Roth conversions.”

Partial Roth conversions are just what they sound like, taking a portion of a traditional IRA and converting it to a Roth IRA. A Roth IRA has tax-free growth like a regular IRA, but it is also tax-free upon withdrawal. The rub is that you must pay taxes in the year you make the conversion. But, if we are in that low-income window, a Roth conversion may be a very wise way to “fill up” those 10-12% or even 22-24% tax buckets, ensuring they do not go to waste.

This Roth conversion strategy (or others in the same vein) will provide triple benefits:

Every year we have the option to defer or accelerate income. Making the best decision we can each year can do a lot to keep more money in our pocket and less in Uncle Sam’s.