Leaving an IRA to a Charitable Remainder Unitrust

Have our cake and eat it

Most of us want to leave as much as possible to our heirs, and for many of us, that includes charity. What if I told you that thanks to quirks in the tax code, you could leave more to your heirs and charity, and less to the government? Read on!

Starting in 2020, any heir other than a spouse who inherits an IRA must withdraw the entire balance of the IRA over the following 10 years. Prior to the enactment of the SECURE Act on January 1st, 2020, beneficiaries used to be able to “stretch” those distributions over their life expectancy, reducing taxes by means of deferral. No longer. This ability to defer distributions was critical, because when funds from an IRA are withdrawn, they are considered taxable income to the beneficiary, and are taxed as ordinary income (like wages).

But there is good news! We can create the stretch ourselves if we know how.

The tool we are going to use to stretch out the distributions is called a Charitable Remainder Unitrust (CRUT). The short and sweet summary is that you contribute assets to a special CRUT account, which receives advantaged tax treatment. Then your heirs receive distributions for their lifetimes, typically between 5-8% of the value of the account per year. When your heirs die, whatever is left goes to charity (either picked by you, or if you allow them, by your heirs). 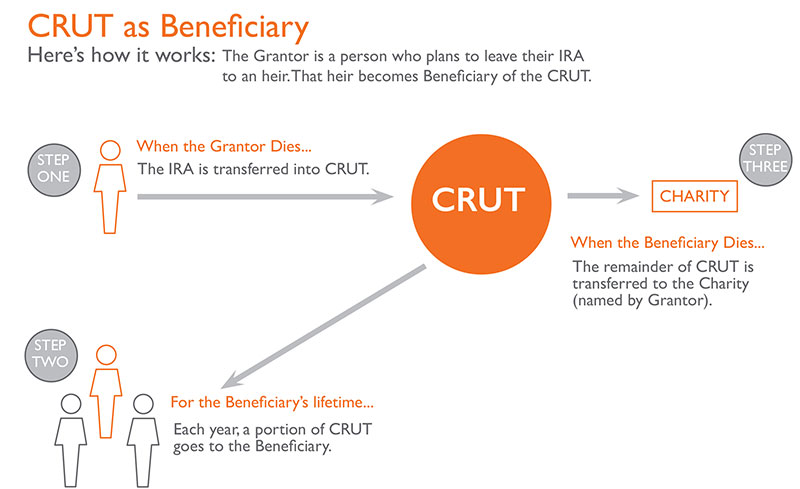 As the law stands today, you can only give your IRA to a CRUT when you die, so other than getting everything set up in advance, nothing officially happens during your lifetime and you can always change your mind.

Show me the money

Let’s get down to brass tacks with an example. Imagine Grandma Gertrude. She has an IRA with a million dollars in it, and she would like to leave money to her dear grandson, Timmy. She would also like to support her favorite local charities. Timmy is 30 years old when Gertrude dies in a tragic needlepoint accident.

Timmy can expect to live at least 50 more years. That is a long time, so let’s break those next 50 years in half. 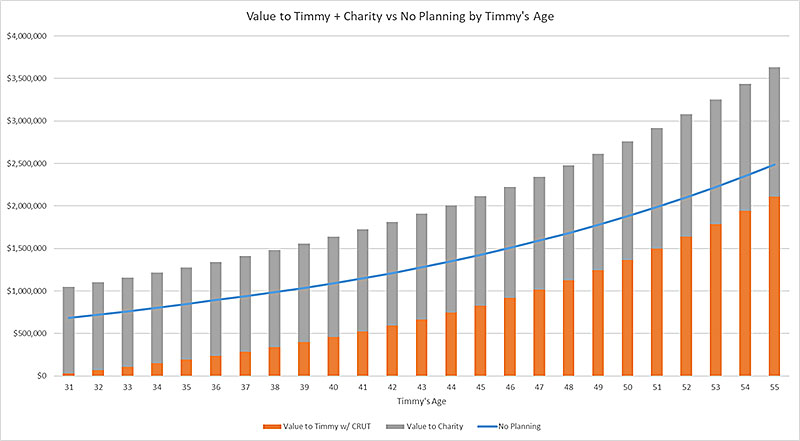 The blue line is how much Timmy would get if Gertrude left him her whole IRA with no CRUT involved. You might notice it is initially worth much less than $1 million to him. That is because he has to pay income taxes on the IRA payments he receives. If Gertrude utilizes the Charitable Remainder Unitrust, the value can be thought of in two parts. The orange bar is the value to Timmy (he gets a distribution of a little over 5%, or $50K per year), and the gray bar is the amount that will eventually go to charity. With the CRUT, the full million dollars is always in play because the charitable remainder gives us those extremely nice tax benefits we talked about before. For the sake of this example, I’ve assumed that in both cases, Timmy can earn a cool 7% per year return on his assets.

What about the next 25 years? 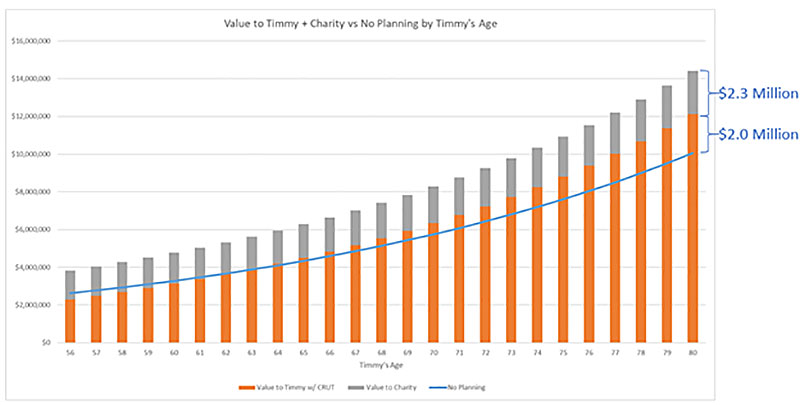 Here is where the real magic begins. By the time Timmy is 63, he will have received more from the CRUT than he would have from inheriting the IRA outright. And there is more than $1.7 million earmarked for charity on top!

If Timmy lives to 80? The decision to leave him a CRUT rather than the IRA outright would benefit him by more than $2 million! And charity would also be in line to receive more than $2 million! We’ve created over $4 million out of thin air. Well, not exactly thin air. We still must obey the laws of (money) physics. In this case, we know the only other place the funds could have gone is to pay taxes, and that is where these windfalls come from. Tax efficiency.

By spreading out the distributions over his life, not only might Timmy receive $2 million extra or more, but charities will get a similar amount. What a win-win!

Does it always make sense for a CRUT to be named the beneficiary of an IRA? As with many financial planning issues, there are tradeoffs and limitations involved. For instance, if you plan to leave your IRA to your spouse, and then they will leave whatever is left to charity, there is no need to add the complication. We can know when to consider the option by going back to B.A.S.I.C.s:

This kind of strategy is inherently full of choices that must be understood and navigated. An attorney will be needed to draft the Charitable Remainder Unitrust with care, and an accountant will be needed to file the appropriate forms and tax returns when the time comes. The costs of such professional services should be considered as part of any decision. Costs will vary according to many factors, especially the complexity of the situation. As a ballpark estimate, the drafting of the CRUT itself is a onetime cost, in most cases between $3-15K. The ongoing accounting needs will be the cost of an annual tax return for the CRUT, in most cases $1-3K. As long as the CRUT is funded with an appropriate amount of assets, as above, preferable over one million dollars, these costs are dwarfed by the potential benefits of the strategy.

Advanced planning techniques like leaving an IRA to a CRUT require a full team to ensure proper planning and execution, but they can be some of the most effective tax and estate planning tools around. For anybody who wants to have their cake and eat it; or anybody who believes that she who laughs last, laughs best, this is a rare opportunity to reach into the pocket of Uncle Sam and redirect dollars to your heirs and your favorite charities.