It was Wednesday and a humid 40 degrees in New York City. It was the first day of 2020. People were resting or watching College Football Bowl games. The financial hub had every reason to celebrate New Year’s Eve; the stock market delivered a total return of over 30% in 2019. Uber, Lyft, Pinterest and Beyond Meat went public. What a country. Kudos to free markets and the land of opportunity. Idyllic, at least until February 19th, when we heard lightning strike.

That lightning bolt originated in Wuhan, China, in November of 2019. (1) It moved silently through January despite the first fatalities and the first case in the U.S. (2) The S & P 500 was up 3.06% through January 21st. In fact, the market absorbed the news on shutting down Wuhan (11 million people), the WHO’s declaration of a public health emergency and the quarantine of The Diamond Princess. On February 19th, the stock market was up nearly 5%. It is approximately 7,500 miles from Wuhan to Wall Street. The sound of lightning travels at about one mile every five seconds. Somehow the math does not add up; the two-month delay suggests a most jagged journey.

The Dow dropped more than 1,000 points on February 23rd. The electric discharge from Covid-19 finally arrived on Wall St. With easy transmission, no vaccine and no medical treatment, Shelter in Place became the primary initial option selected to slow the virus’ infection rate.

Dr. King once warned that, “All progress is precarious, and the solution of one problem brings us face to face with another problem”.

Indeed, locking down provided just the respite needed for the healthcare complex to obtain more masks, ventilators, and PPE. However, Sheltering in Place introduced, as Dr. King suggested, a host of new problems.

The first was economic. Staying at home implicitly meant not being in stores, restaurants, gyms, hotels, or airports. Consumption of goods and services was restrained by both forced closures and an unwillingness to be exposed to the virus. Job security became tenuous. Unemployment spiked to 20 million Americans in March, twice the level experienced in the 2008 Great Recession. (3) Fewer jobs and lower sales triggered a negative cycle that included lost wages, lost rents, and a rapid erosion of consumer confidence. (4) Combined, these factors led to a 5% contraction in GDP. (5)

A point we want to emphasize is recognition of the stock market’s anticipatory nature that creates the seeming disconnect between headlines and market performance. The economic jolt, that did not show up in the economic statistics until later March, were telegraphed by collapsing equity markets in February. It took only 30 furious days, between February 20th and March 20th for the electric discharge of Covid-19 to burn through the financial markets. The S & P 500 troughed down 34% while both small cap and foreign stocks did worse. Not only were equity markets scorched, most bonds smoldered in sympathy. Those bonds issued by the U.S. Treasury, like cacti in a house fire, were the only ones spared. The headlines were grim: we were heading for the worst economic dislocation since the Great Depression.

The second problem associated with the shutdown involved perception. Many people mistook governmental permission to re-open the economy with caution and partial restrictions as an “all clear” signal. Unfortunately, the virus does not care about human perceptions. Complacency led to lax standards around social distancing and mask wearing that would come back to haunt the markets as pressure mounts to “go back inside”.

Rescue for Wall St. came, approximately “an hour and a half before the markets opened on March 23rd when the Fed pledged that it would do whatever was necessary to stabilize markets and buoy the economy.” (6) The fire, at least for the time being, was extinguished in the financial markets.

Individuals, exhibiting some combination of complacency and stir craziness eventually left their homes to tiptoe back into some form of normalcy. May brought 2.5 million new jobs; the highest level recorded (7) and a 17.7% surge in retail sales. (8) At the risk of being redundant, the stock market rose in advance of this data being released. In fact, the surge in equity prices since March 23rd is rooted in Fed actions and the anticipation of improved economic data.

The cost paid for Fed efforts to “save” the stock market included the attraction of the bond market. The 1-Year Treasury Note provides a paltry yield of approximately .16%. Not keeping pace with inflation does not constitute a winning strategy in the long run. Yet, the price of avoiding uncertainty has never been higher.

Stocks offer the opportunity for higher returns, but at what cost? When will we finish with Phase 1 of the virus? Today we see a resurgence in Covid-19 related hospitalizations in specific geographies. Florida reports that 40 hospitals are at capacity. (9) Governors in many states have started backtracking on the reopening process. What will Phase II look like when coupled with the seasonal flu? When can we expect an effective, well distributed vaccine? Dr. Fauci recently warned that we may need more than one vaccine and that any vaccine we develop may not provide permanent protection. (10) Will government continue to fill every economic gap? Relief payments are due to terminate by the end of July absent Congressional extension. How will the pending election impact policy? Who picks up the tab for the trillions of dollars flowing into the economy? Will consumers, concerned about their jobs and their health, continue to hoard cash at rates not seen since World War II? (11)

Despite substantial improvements, can the economy normalize with unemployment at 11.1%, worse than the peak unemployment recorded in 2008? (12)

It is difficult, if not impossible, to generalize about stocks today. The S & P 500, as the name suggests, consists of 500 different stocks. The average performance of those 500 stocks, as noted in the graph below, is -12.06% for the first half of the year. (13) 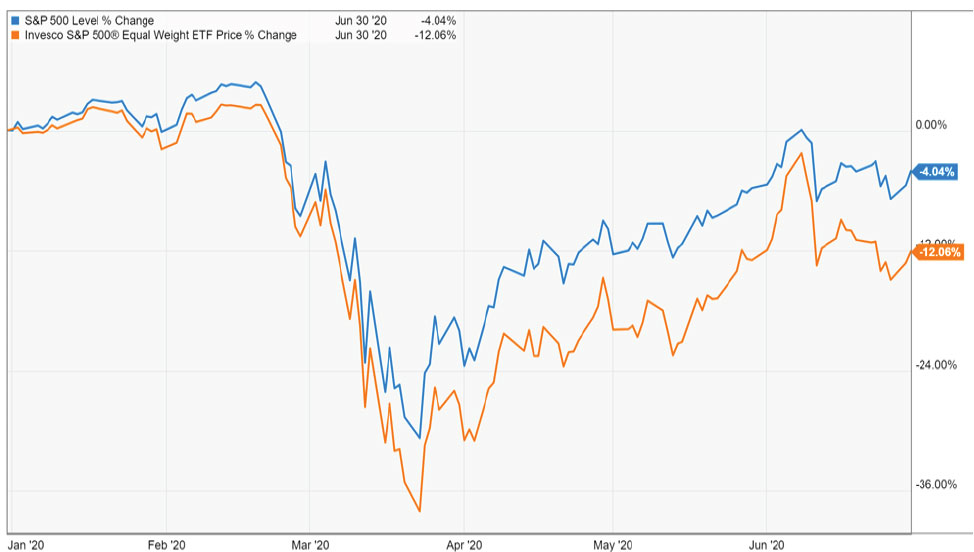 Why does the average stock appear to be down three times more than the official S & P 500 Index? Because the bigger the stock, the greater the weighting. In fact, the top 15 stocks account for 34% of the value of the index. “While the most-expensive stocks have gotten far more expensive—the average valuation has risen from 26.3 times to 38.3 times—the average for the remainder of the market hasn’t changed much. It’s 14.5 times versus 13.2 times. The takeaway: The broad market is not overvalued.” (14) Again, the financial markets seem willing to pay a high price for the “certainty” of earnings from Amazon and the other giants.

Our focus remains on your entire portfolio that, like any other sound structure, entails the integration of several different components. We maintain cash, despite the lack of yield, for ultimate liquidity and the flexibility to pounce on opportunities with short notice. We used this flexibility frequently this past spring, improving investment results by buying stocks at depressed prices. We hold bonds to generate some cash flow, but mostly to buffer the volatility of the stocks. We are adamant today about selecting only high-quality bonds.

Large cap U.S. stocks represent the core of your equity position. Our emphasis here remains unchanged with a focus on quality and balance sheet strength. We own several positions that will thrive, despite the status of the virus, particularly in the technology and healthcare space. However, we balance these with stocks far more sensitive to the status of Covid-19, including travel and entertainment names that offer more compelling valuation.

Small stock behavior tends to lead economic growth. These stocks were far more volatile (both directions) this spring. It would be reasonable to assume that they will outperform in anticipation of a post-Covid environment.

Finally, we remain committed to foreign stocks that currently provide more attractive dividend yields, cheaper valuation and a good hedge should the U.S. dollar falter under the weight of our printing presses.

The basic survival strategy for lightning is to “get to a safe space”. However, we realize that permanently residing in a “safe place” such as cash, presents another set of challenges. The returns are inadequate for most people to reach their long-term financial objectives. The notion of “timing” back into the stock market is fraught with risk as depicted in the chart below that indicates the cost (30%) of missing the five best days of this year. (15) 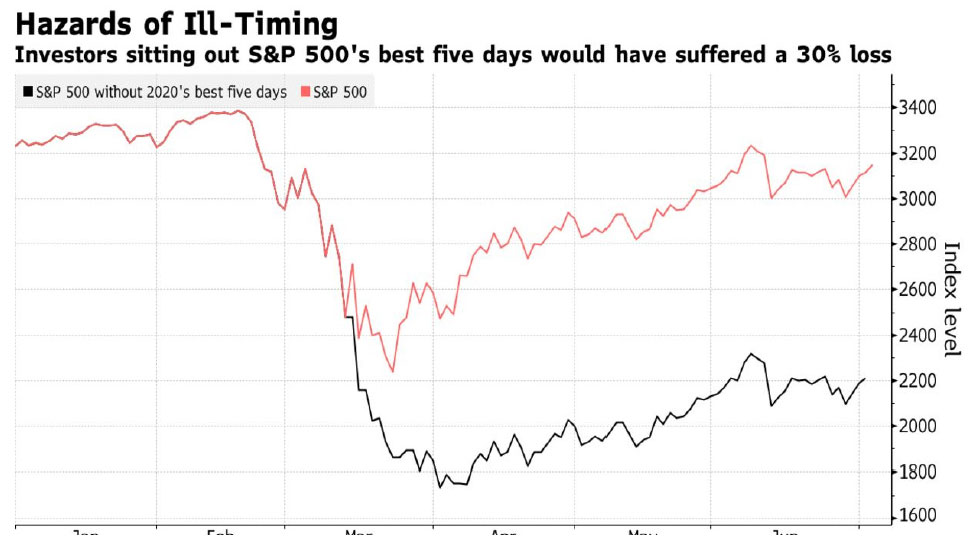 Of course, the extreme volatility provided two opportunities for mistake, as noted in the cartoon below. One could have bought right before those 30 particularly nasty days, or, sold in advance of the remarkable rebound.

We want to conclude this note by sharing an additional quote from Dr. King that was certainly meant for social change, rather than investing.

“If you can’t fly then run, if you can’t run then walk. If you can’t walk then crawl, but whatever you do you have to keep moving forward.”

These are unique and challenging times for the economy and for our society. We completely understand any trepidation that you might be feeling today, but we can assure you that it’s our intention to keep you moving forward. 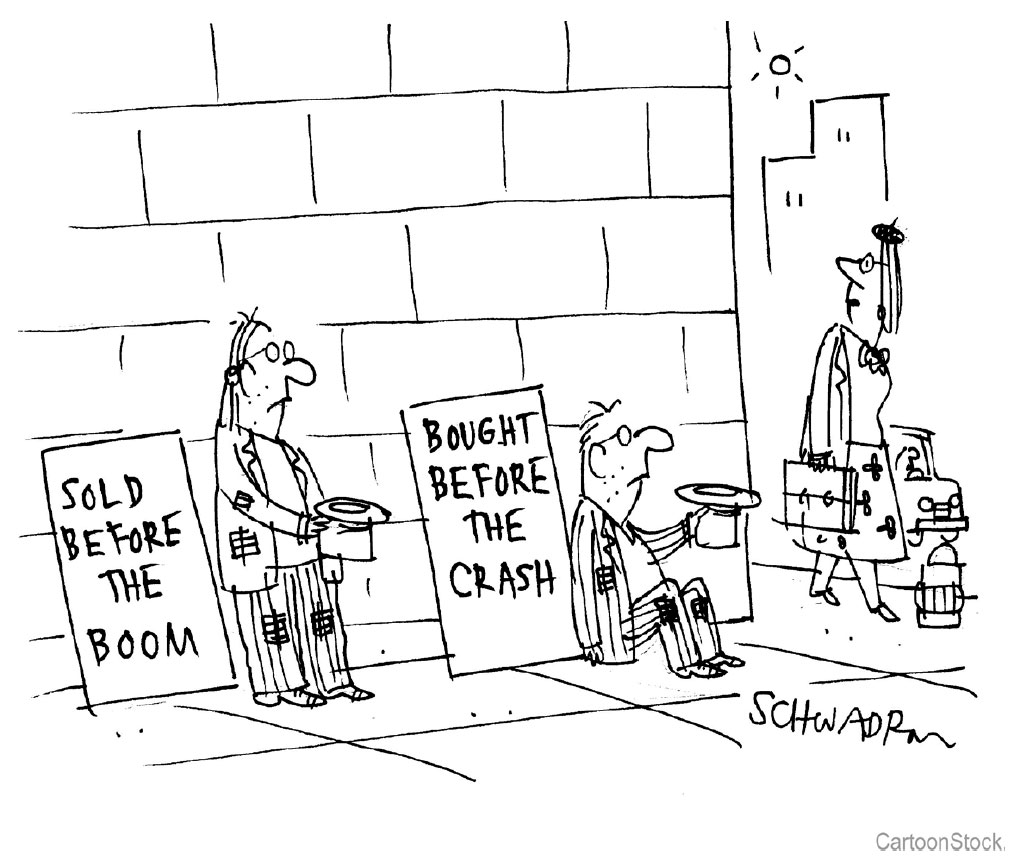